Lately, Cell (Impact Factor=66.850) released "Ferroptosis" review to mark the ten-year anniversary of the discovery of ferroptosis [1]! The article focuses on the key regulators of this form of cell death, which promise to yield further breakthroughs in ferroptosis mechanisms and therapeutic benefit in tumors. SLC7A11 as one of the most critical regulators of ferroptosis, in recent years, lots of evidence suggested that SLC7A11 drives ferroptosis resistance and plays a regulatory role in diseases. Many reports implied that SLC7A11 is not just a potent target for ferroptosis, but also a key mediator in the treatment of drug resistance in a variety of tumors, including lung adenocarcinoma, gastric cancer, colorectal cancer, glioma, and others. To date, researchers have explored a variety of anti-cancer approaches, however, drug resistance is a major barrier against successful cancer treatments. Therefore, SLC7A11 as a potential target in tumors might offer an alternative solution to get out of the dilemma. Well, what is SLC7A11 and SLC family? How’s the mechanism of SLC7A11 in ferroptosis and tumor drug resistance?

1. What are Solute Carriers (SLCs)?

The Solute Carriers (SLCs), or SLC superfamily, is one of the most important families of membrane transport proteins in human cell membranes (including intracellular membranes) [2]. The human SLC superfamily consists of 52 subfamilies with more than 400 members [2, 3]. The SLC superfamily is the second largest family of membrane proteins after the GPCR [4]. The SLCs have a wide subcellular distribution and can be found not only in the cell membrane, but also in the nuclear membrane, endoplasmic reticulum, mitochondria, lysosomes, Golgi apparatus and peroxisomes [4, 5]. SLCs, as typical transmembrane proteins, transport a wide array of molecules, including metal ions, inorganic ions, organic ions, amino acids, lipids, sugars, neurotransmitters, nucleic acids, and drugs [6-8] (Figure 1).

Studies have shown that abnormal expression or functional defects of SLCs proteins are closely associated with the development of a variety of diseases, including tumors, metabolic diseases, cardiovascular diseases, immune system, and neurological dysfunction. These SLCs proteins were welcomed with great interest by researchers [7]. Particularly in tumors, SLCs serve as major components of amino acid transporter, but the bulk uptake of amino acids by tumor cells is achieved mainly through various overexpressed amino acid transporters [7-8]. Blocking uptake of amino acids into cancer cells is therefore a viable strategy to curb tumors. Figure 1. SLCs-mediated movement across the membrane [6-8]

Solute Carrier Family 7 Member 11 (SLC7A11) (also known as xCT) belongs to the cystine/glutamate transporter protein, mainly involved in amino acid transport across the plasma membrane [9, 10]. The SLC7A11 gene is located on human chromosome 4q28-q32, encoding the amino acid transport carrier xCT. SLC7A11 has 12 transmembrane domains composed of 501 amino acids in human, with its N- and C-termini located in the cytoplasm [9-11] (Figure 2). SLC7A11 is the specific subunit of System Xc-, an antiporter importing cystine while releasing glutamate [9-12]. System Xc- consists of two subunits, the light chain subunit SLC7A11 and heavy chain subunit SLC3A2. In recent years, multiple studies have revealed that SLC7A11 is highly expressed in a variety of tumors, which is closely associated with ferroptosis, stress resistance, and nutrient dependency [13-14]. Currently, SLC7A11 becomes a new potential target for cancer therapy. 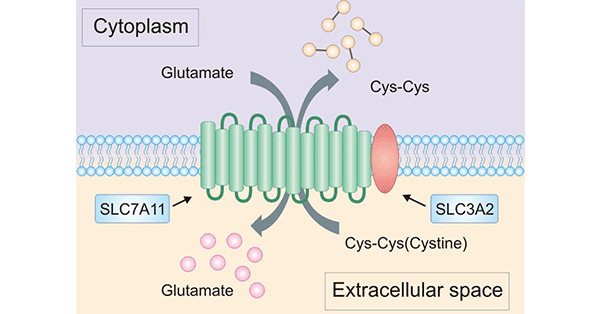 What is System Xc-? System Xc-(also commonly known as cystine/glutamate antiporter) is an amino acid antiporter that typically mediates the exchange of extracellular l-cystine and intracellular l-glutamate across the cellular plasma membran. As mentioned early, a System Xc- is composed of light-chain SLC7A11 and heavy-chain SLC3A2 (also named CD98 or 4F2hc) [10]. SLC3A2 acts as a chaperone protein to maintain the stability of SLC7A11 protein. Notably, SLC7A11 serves as a functional subunit of the System Xc-. SLC7A11 is highly specific for cystine and glutamate to participate in the extracellular uptake of cystine and release of glutamate. System Xc- mediated transport of extracellular cystine is vital for appropriate maintenance of intracellular cysteine and glutathione (GSH). In fact, system Xc- is involves in ferroptosis, apoptosis, and autophagy-dependent cell death, contributing to different diseases and tumor drug resistance. Importantly, SLC7A11 has pleiotropic functions beyond its function in system Xc-. Therefore, studies on the system Xc- have focused on SLC7A11 [11, 41] (Figure 3). 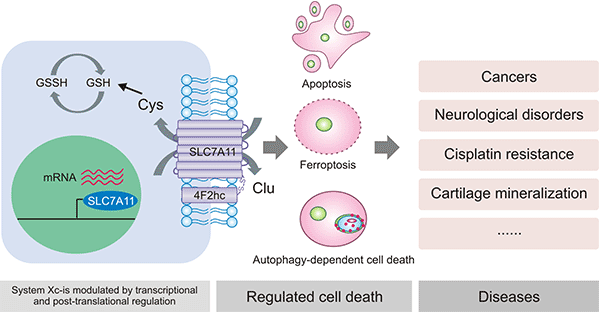 SLC7A11 is a specific amino acid transporter protein and a key regulator of ferroptosis (click to see the article on ferroptosis), which in turn leads to lipid peroxide accumulation and inhibition of GPX4 activity, ultimately induces ferroptosis in cells (Figure 4) [15, 16]. In addition, the classical ferroptosis promoter Erastin, which targets SLC7A11, induces ferroptosis and reverses colorectal cancer drug resistance [17, 18]. Researchers have found that overexpression of SOCS2 promotes K48 chain-type ubiquitination degradation of SLC7A11, a key protein for ferroptosis, and regulates ferroptosis in hepatocellular carcinoma [19]. It was also recently shown that p53 can bind to the promoter region of the SLC7A11, which inhibits the SLC7A11 activity, as well as the GSH synthesis, leading to the ferroptosis [20, 21]. 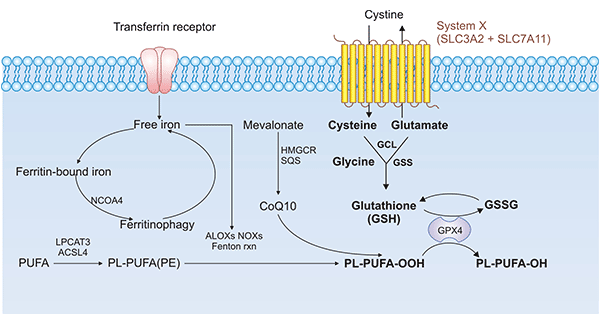 
4. The Roles of SLC7A11 in Targeted Tumor Therapy

It has been reported to IGF-I activates SLC7A11 expression in estrogen receptor-positive (ER+) breast cancer cells, regulates cystine uptake and cellular redox state, and promotes cell proliferation, whereas this process can be inhibited by salazosulfapyridine (SSZ) [31]; a virus-like-particle (VLP; AX09-0M6) targeting SLC7A11 was applied, suggesting that mice immunized with AX09-0M6 had significantly less pulmonary metastases compared to controls in syngeneic models of breast cancer; an anti-SLC7A11 viral vaccine using a bovine herpesvirus type 4 (BoHV-4) vector, which was able to confer immunogenicity to tumor antigens. The BoHV-4-xCT vaccine impairs breast CSCs and protects mice from metastases in transplantable mammary cancer models. The safe vaccine may be a potential option to prevent breast cancer recurrence [32]. In ovarian cancer, Olaparib reduces the expression level of SLC7A11 protein in a p53-dependent manner, promoting ferroptosis and inhibiting tumor progression [33].

In gastric cancer, knockdown of GDF-15 in MGC380 cells resulted in downregulation of SLC7A11, which also promoted Erastin-induced ferroptosis in tumor cells, but did not affect other ferroptosis-related genes, such as GPX4, transferrin, and ferroregulin (Hepcidin) [37]. In a mouse model of gastric cancer, inhibition of SLC7A11 by SSZ or excision of the CD44 inhibited the growth of gastric cancer cells. In Gemcitabine-resistant pancreatic cancer cells, SLC7A11 expression was upregulated. The inhibition of SLC7A11 with SSZ could increase cell killing with Gemcitabine under low doses. Thus, a combination based on targeting SLC7A11 inhibitors could help reverse Gemcitabine resistance in pancreatic cancer cells [10, 39, 40].

Data from Pharmsnap suggested that there is one clinical drug (Anti-xCT antibody-drug conjugate (Agilvax)) targeting SLC7A11, which is in preclinical development for tumor treatment. At present, it is well established that SLC7A11 promotes drug-resistance or chemo-resistance in cancer therapy. Therefore, SLC7A11 inhibitors can be used in combination with clinical first-line chemotherapeutic agents to achieve better anti-tumor effects. In addition, many reports have suggested that SLC7A11 is widely distributed in a variety of malignant tumors. For this reason, the inhibition of SLC7A11 expression and activity is favorable for tumor treatment.

To fully support researchers and pharmaceutical companies in their research on the SLC7A11 targeted drug research in tumors, CUSABIO presents SLC7A11 active protein with a 12-transmembrane-domain (Code: CSB-CF892171HU(A4)), to assist you in your research on the mechanism of SLC7A11 or its potential clinical value. 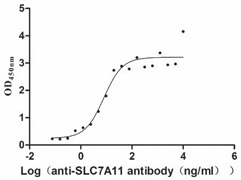 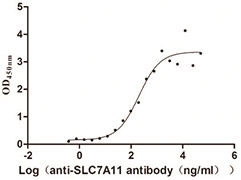